Posted on September 30, 2012 by roadschoolingclaytons

It is currently 4:30am and so stinking hot I’ve decided to write instead of continue my futile attempts at sleep. We arrived in Athens today, by plane from Rome. So much quicker than the ferry alternative, and according to any online quotes I managed to get, about 700 euro cheaper than the ferry alternative. We knew our window for seeing Athens was small, so we had decided to take a taxi from the airport to our hotel in Pireaus to save time. When we arrived at the taxi stand we were informed that there are no taxis for five people in Greece, so our option was two taxis (about 100 euro) or the bus (about 22 euro). We chose the bus. Which would have been fine except that it took an hour and twenty minutes, and then the driver put us off at the wrong stop, and we couldn’t find our hotel. So, it’s 1pm ish in pireaus on a Sunday. Streets are deserted. Everything is closed. And all the street signs are not just in a foreign language, they’re in a foreign alphabet. We are dragging our luggage around. It’s about 40 degrees in the shade. The slight breeze feels like a hair dryer. And the kids have been up since 5:30am. I know I don’t need to use any descriptive words to explain what that was like.
And that was just the beginning. More later. 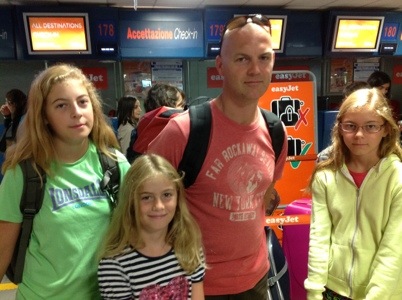