Posted on December 30, 2012 by roadschoolingclaytons 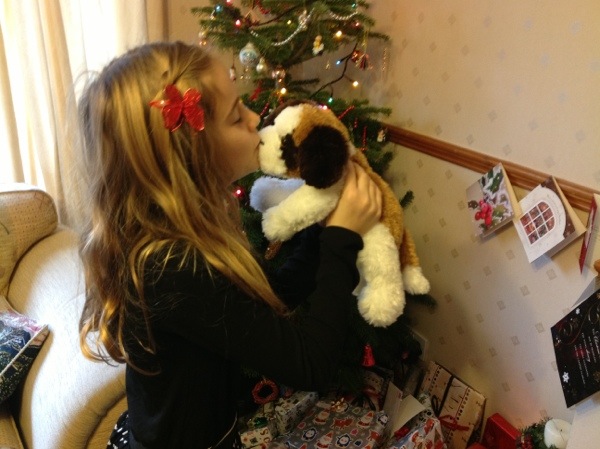 I suppose it may be my imagination, or just wishful thinking, but I’m sure our girls were different this Christmas. Perhaps it was simply a maturity that comes with getting a little older, or maybe it’s just that they knew they couldn’t ask for anything that wouldn’t fit in the suitcase (although that didn’t stop one of them from asking for a piglet), but they all seemed more thankful, more gracious somehow. They exclaimed on many occasions that they couldn’t believe how much stuff they got. They thanked everyone profusely and sincerely for any gift, no matter how small. One even said she felt guilty at having so much when others had so little, and wondered if you could send actual stuff to World Vision or did it have to be money.
There was no mention whatsoever of the items on their lists that they did not get, no wishing they got something else. And in reality, they got less than they usually do, and a lot of what they got was simply replacing things that were lost in Europe – clothes, journals, books, swim goggles, and their precious stuffed toys. Santa somehow managed to find the exact same ones, and although these were newer models, they seem to have brought great comfort. The little one maintains hers is the best gift she got, and that thinking about the robbery doesn’t even make her sad anymore. And she’s the materialistic one! She asked for an iPod touch or a Nintendo 3DS, neither of which she received, but now that she has her teddy back, it doesn’t matter.
I am really proud of them, and I’ve told them so. We had a wonderful Christmas, but I’m not concerned that they will be “spoiled”. I feel like even just the tiny little bit of the world they’ve experienced has been valuable to them. They have seen a little bit of a life that is not as easy as their own. They have witnessed poverty and hardship in the places they have visited, as well as the contrasting luxury that is available to so few. No, they have not been to the third world, but at least they know not everyone has it as good as they do.
So, again, maybe I’m clutching at straws here and trying to find a positive effect (since they have yet to directly express one) of their travels, but I’m going to go with it.
I see no other way to explain a certain child’s generosity of spirit and lack of jealous tantrums.