Posted on February 15, 2013 by roadschoolingclaytons 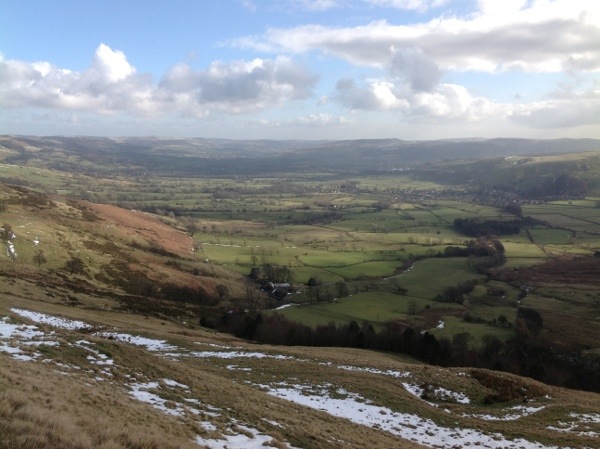 We woke up this morning to bright sunshine and 8 degrees, so we abandoned the math, packed up a quick lunch, and headed out to the Peak District for a hike. We’ve been having a bit of outdoors withdrawal since coming back from the Lakes…well, most of us have. The littlest one hasn’t. She put on a skirt and tights this morning and declared that her and hiking don’t match. She thought she might rather go shopping with Nana, but being the rotten parents we are, we made her come with us. Because we knew how fabulous it was going to be.
The Peak District is amazing, beautiful little villages and stunning scenery, and Dev has been itching to take us to walk Mam Tor and the Great Ridge for a while now. It’s a five mile walk up and along a ridge offering panoramic views of the surrounding countryside, rounded hills and gritstone “edges”.
Turned out, it was hard for us wussier members of the family to appreciate those beautiful views because of the biting wind in our faces and the fact that we had to pick every step carefully due to the unanticipated snow and ice on the top of the hill, combined with the slimy mud. Yes, I know I sound like a whiner. I can be like that sometimes. And I was today, along with two out of three of our children (the other is delightfully agreeable all the time and speeds ahead with her father incessantly discussing Harry Potter and Tolkien). The other two trudged along behind, slipping periodically in the mud, soaking mittens and staining coats, complaining quietly under their breath.
Anyway, it was hard work, this walk. And if you hadn’t guessed, I wasn’t finding it particularly pleasant, and I was probably feeding the dissension of the other two, one of whom stated, “I don’t know why we even do these walks anyway. What is the purpose?”
To which Daddy answers, “It’s character building”.
Anyway, because it is such rough going, after an hour or so, we decide we won’t be able to complete the circular route, so we split up. Dev turns back to go get the car, and instructs us to “carry on down this hill, along that path, and when you come to a road, follow it to Castleton.”
So, we set out. But the path is more a stream than a path, really. And it has very steep banks covered in snow and mud. Kind of gorge-like. So we are trying to keep out of the water, but we run out out of room on the bank and decide to forget about staying dry and just walk down the rocky stream. As we clamber down the bank, we hear a little cry.
It is me. As I slide down the muddy banking on my ass.
The kids haul me up, and, covered in mud, we carry on, and thankfully, we soon reach the road. Phew. Onwards and upwards. We round the first bend feeling much better, quite proud of ourselves actually, and starting to have a few giggles over the state of us (especially me). Then we spot something on the side of the road, and the kids run over to it excitedly. It turns out to be the first badger we have ever seen! So exciting! Except that it’s dead. And its eyes have been pecked out by crows. It is clear that it has been hit by a car, but it is right next to a low section of crumbling dry stone wall, positioned as if it was almost able to get to it and into the field beyond, but not quite. And then the kids look over the wall and see the entrance to the den. What if there were baby badgers in there? The trauma.
After a makeshift wooden cross is lain beside the badger, I am able to convince them we should carry on. Let’s see what’s around the next bend. Hopefully something more cheerful.
Turns out to be a bubbling brook with two playful grey squirrels chasing each other along the banking. Then a small farmyard on the roadside with a ewe and newborn lamb in it. This is the first one we’ve seen and it evokes many oohs and ahhs from all of us. It is adorable!
We finally make it into the village and follow the signs to The Visitor Centre where we are meeting Dev. The kids practically knock him over in their eagerness to tell him everything we’ve seen on the last leg of our walk, and I obligingly turn around to display my muddy backside to illustrate their story of my fall. “I thought she broke her back!” says the little one.
We crack open the thermos for hot tea, which tastes so much better than it would have if we were sitting on the couch drinking it, and settle in for the drive home. The kids chatter and laugh about the walk, and even apologize to their father for whining. Because, of course, he was right. It is character building. And the more arduous the task, the more rewarding the successful completion. As I think back to many of the things we’ve done over the past few months, I am reminded of how much more pleasant a long car journey is if you’ve just worn everyone out with a five mile hike, or how much better a bed feels after a day of tramping around an unfamiliar city, how much sweeter the gelato after climbing a dusty mountain in 29 degree heat. It reminds me of why Aldous Huxley’s utopia fails in Brave New World; it is impossible to feel content unless you have experienced some discontent. And even if the discontent makes daddy want to give in, and never take all us whiners walking again, he should persevere. For the sake of our characters. 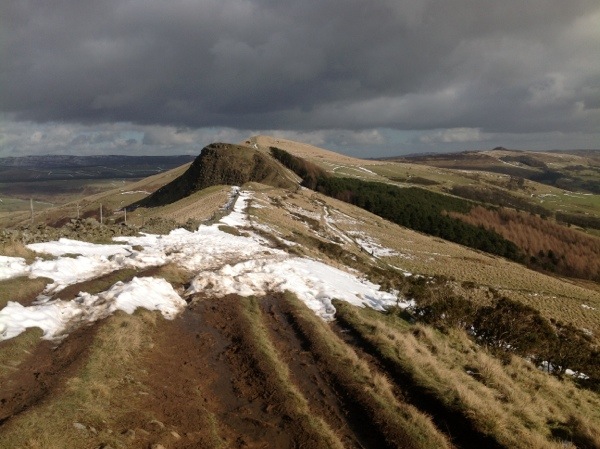 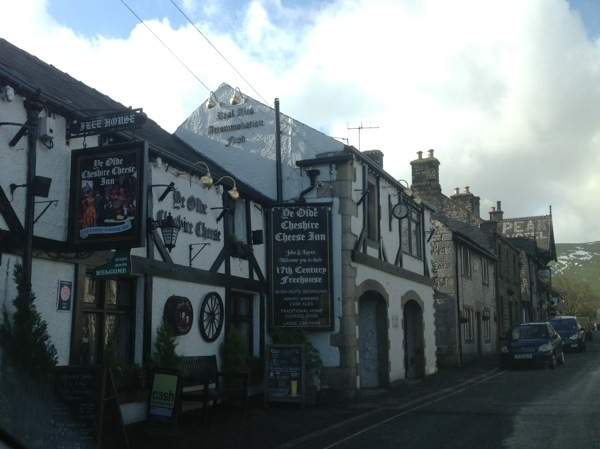