Posted on February 5, 2013 by roadschoolingclaytons

This is our third night in Edinburgh, and despite the chilly temperatures and the driving winds, we have clocked a fair number of miles walking around this beautiful old city. We started off on our first afternoon with The Potter Trail, a ninety minute magical walking tour of the city featuring locations which inspired scenes and characters in JK Rowling’s books. We met outside Greyfriar’s Bobby’s Inn, and before we even started the tour, our robed guide, Will, started the debunking of local myths by telling us that the tale of Greyfriar’s Bobby was not actually true. It was made up to attract tourists. It worked, and obviously still is working judging by the number of people taking photos of Bobby’s statue, and the flowers and little doggie figurines that are still being placed on Greyfriar’s grave. The story is that the little dog sat on his master’s grave for years after he died. Until he himself died, in fact. Very touching. But completely fabricated.
Anyway, the tour was a great introduction to the city as well as a great way to engage the Harry Potter mad people in my family. We saw lots of cool things, including JK Rowling’s handprints in the sidewalk, and the cafe where she wrote the first book. And the cafe that claims to be where she wrote the first book. Second myth debunked. Despite the signs outside The Elephant House claiming it as “the birthplace of Harry Potter”, it is, in fact, a place where she wrote bits of the second and third books, but not the first. We did have to return there the following day, though, for an expensive coffee, because of the bathroom. The bathroom walls are covered in what might normally be called graffiti and scrubbed off, but this is special graffiti. This is Dumbledore’s Army. Almost every inch of wall and door space is covered in names of people from all corners of the earth who have been mesmerized by Rowling’s tales of witches and wizards. But there was still room for our three to squeeze their names on there!
The magical and mythical are what Scotland is all about, really, and the theme continued as we toured the magnificent castle. One of the highlights there was seeing the Honours of Scotland (the Crown Jewels), and the Stone of Destiny. Which is another one of those tales that may or may not be true…but don’t we just love to believe them?
Today we visited The Camera Obscura, the first purpose-built tourist attraction in Edinburgh. It’s amazing that this place is 150 years old and it can still draw a crowd! The kids loved the fact that they could spy on unsuspecting castle visitors from five floors up – and from inside a building! And then we grown-ups almost threw up from the mirror maze and the freaky tunnel thingy.
We’ve had busy days, but it has been great to walk back to Brooks Hotel, knowing our cosy room and comfy beds await us. There’s something so special about staying in a nice hotel that makes all that tramping around in the cold worthwhile. It’s like your reward at the end of the day! And we leave tomorrow – looking forward to that last Scottish breakfast in the morning. Maybe I’ll actually have the haggis this time!
But probably, I won’t. 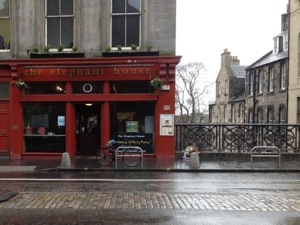 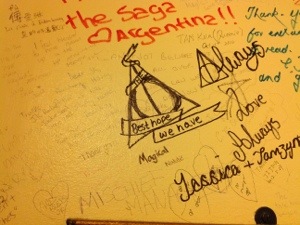 One thought on “Edinburgh Myths Debunked”