Posted on September 1, 2012 by roadschoolingclaytons

So here’s a tip for all you future family travellers. You know how us adults always want to go to cathedrals and castles and go on long walks in the country…that sort of thing? But as I may have mentioned before, to kids, it’s really sometimes “just another church”. And that fair enough. Because it is just another church to an eight year old. Unless of course, it isn’t. Because what if it is the church where the courtyard scenes in Harry Potter were filmed? Then it’s not just another church anymore. It’s a way to live out scenes in your favorite movie – to imagine yourself walking across the courtyard with Harry and Ron. So mom and dad can marvel at the rose window, the tower, the acoustics, the history, and the sheer magnificence of a cathedral like Durham. Everyone’s happy!
Even yesterday’s long walk at Hadrian’s Wall becomes a little more interesting when you know that the one and only tree for miles along the wall is the one that features in the opening scene of Robin Hood Prince of Thieves. To be fair, the older girls are interested enough by the fact that the wall was built by Romans 2000 years ago to keep out the wild and crazy Celts, and the fact that it is actually still there! But the Robin Hood tree is added value, and acts as a bit of a buffer – a “just-in-case”.
It’s amazing to see the change in the demeanor of the kids when you can remind them of a book they’ve read that takes place here, or a movie scene that was filmed here, or even that a favorite author grew up here. It becomes relevant and real and interesting. It gives it life in the eyes of a child. And selfishly, it allows us to do many of the things we want to do without the inevitable whining and complaining that we might previously have had to endure.
Next stop, Tintagel Castle, rumored to be King Arthur’s stronghold. We are collecting books and movies now to read and watch before we head to Cornwall next week! 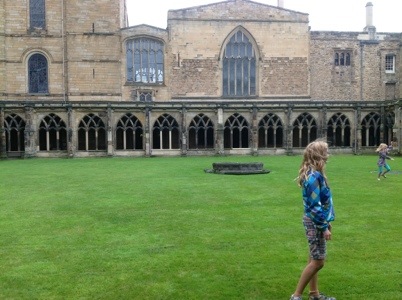